Once I started to do more research into Indian imagery in current nationalist discourse, I stumbled across quite a few examples of the slogan “The Indians could not stop immigration. Now they live on reservations.” It seems that this slogan is not restricted to Germany’s right fringe and racists: It was used in 2008 by a regional party in the Italian-speaking part of Switzerland, the Lega dei Ticinesi…

…where members of the outright neo-fascist and separatist Italian party Lega Nord picked it up for their own anti-immigrant election platform: 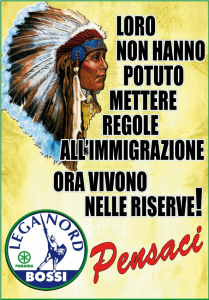 …as well as the Swiss populist SVP in their nativist campaign for the 2014 referendum on immigration: 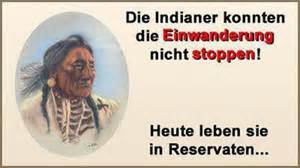 In Germany, the neo-Nazi party NPD employed the slogan in their program for the state elections of Saxony some 10 years ago. Then prime minister of Hesse, Roland Koch, triggered a public outcry in 2006 by stating that nothing remained of the ancient Native American cultures thanks to the American settlement but that we Germans are “more than the Indians,” thus co-victimizing with and denigrating Native Americans at the same time. Koch is a member of the CDU (Merkel’s party); its Hessian branch has a reputation for its conservatism, and many German newspapers pointed out the obvious similarities between Koch’s and the neo-Nazis’ arguments (most of the previous examples are discussed in this German-language article of the Swiss Tagesanzeiger).

In Leipzig, the local branch of PEGIDA, LEGIDA (= “Leipzig Against the Islamization of the West”) has used similar notions. We don’t know for sure if the person depicted here follows the Indians-couldn’t-stop-immigration argument, but his attire and his banner suggest such a conclusion. He seems to make a point wearing the same T-Shirt depicting Sitting Bull at the rally each Monday. Now that the days have grown colder, he wears it over his sweater, making an explicit statement. The banner he is holding  in the picture addresses a number of typical, and typically contradictory, issues (unfortunately, I couldn’t find an image that shows both the T-Shirt and the banner): 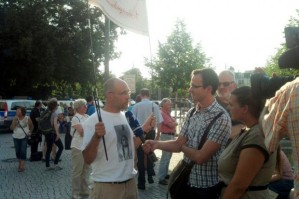 1) The banner voices opposition “against US imperialism.” Of course, this has been a popular trope in German cultural pessimism since the late 1800s, especially where co-victimization with Native Americans is concerned. These German texts have argued “first, Americans destroyed Indian cultures, and now they are trying to do the same thing to us.” You could find this argument among Indianthusiasts around 1900 as much as among proponents of völkisch ideology who provided the breeding ground for the Nazis. Of course, the argument also worked both in communist East Germany and among the West German radical left.

2) It decries “EU Fascism”―apparently, it is currently very popular to call your opposition “fascists.” People who use the term usually don’t really understand the ideological background and philosophy of the corporatist state of Benito Mussolini’s movement. It was called “fascism” after the fasces, the Roman lictors‘ sign of office (equivalent to police forces). The fasces are a bundle, comprised of sticks/arrows and an axe, that symbolized police authority and the power of the state. Many people today understand ‘fascists’ as ‘those who publicly (and often violently) contradict my worldview,’ or, more generally and simply, as “assholes.” This protester here seems to understand the umbrella organization of the EU as “fascist” because it appropriates rights that previously belonged to individual sovereign countries. This crude ideology is reinforced in the banner’s reference to Richard-Nikolaus von Coudenhove-Kalergi who was a proponent of the pan-European movement in the 1920s, a movement that the Nazis prohibited because of its internationalism and liberalism. We can only assume that this person here believes the EU to be fascist because it has authority over German affairs…

3) The banner also decries “rainbow racism” (Regenbogen-Rassismus) This brings us back to the notion of Germans and Indians as fellow victims. It adds that “rainbow racism” means “genocide,” most likely against white people or Germans. Thus, it seems to allude to the notion of ‘Volkstod‘, the demise of German peoplehood through multiculturalism that is currently a buzzword among neo-Nazis and that I discussed in an earlier post. Although this protester does not explicitly use the slogan “Indians couldn’t stop immigration,” the combination of Sitting Bull T-shirt and “rainbow racism” represents this argument clearly enough. Obviously, this ignores any historical precedence of the degree of inclusiveness within North American tribal societies; they had to be inclusive and adopt members of other tribes and other races into their communities if they wanted to survive in a harsh environment, threatened both by invaders’ military forces and their diseases. They simply could not afford to be xenophobic racists.

The “Indians couldn’t stop immigration” argument pictures the history of Westward expansion on the North American continent as a gigantic racial conflict, or even race war, of whites against Native Americans which the latter, in this reading, had to lose because the tribes didn’t unite as a race, because they were not race-conscious enough. The Nazis stressed this over and over as a cautionary tale: Nazi-Germany had a chance to survive, they argued, because it had overcome the internal strife of the Weimar years by uniting under Hitler. In countless speeches and novels promoted by the Nazis, then, Hitler was compared to both Arminius, the Cherusci leader who united the Germanic tribes and destroyed three Roman legions in the Battle of Teutoburg Forest (9 AD) which ended Roman intrusion. Both were compared to Tecumseh, whose pan-Indian movement united previously quarreling tribes in the early 1800s: the German novels of the 1930s portrayed Tecumseh as a ruthless dictator who sought to lead the (mindless) Indian masses toward redemption, only to be cast down by betrayal at the hands of the devious English.

In both the Arminius, Tecumseh, and Hitler arguments, the threat to peoplehood is exactly what this protester’s banner proclaims: “genocide”, that is, “Volkstod” through alien intrusion and the infusion of alien culture, technology, and ideas. For racists and völkisch nationalists, culture is an inherent part of peoplehood and it does not mix with outsiders. Thus, immigration, miscegenation, and cohabitation among cultures, in their understanding, will always lead to conflict and, eventually to the demise of peoplehood.

So, without using the actual slogan about Indians and immigration, this protester promotes a tradition of nationalism and racism in German Indianthusiasm that helped the Nazis rein in a very popular movement for their propaganda efforts. It is a revelation to see that the same argument is obviously still very powerful to promote nationalist and racist ideology in the twenty-first century.

By frankusbeck in Uncategorized on October 5, 2015.
← “Indians Couldn’t Stop Immigration” (Part II): A ‘National Indian Party’ Saves the German People Refugees and Guns: Catchy Historical Arguments on Emotionally Charged Social Issues in Germany and the US →