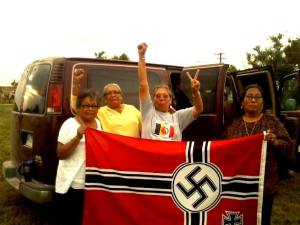 A friend just stumbled over this article and forwarded it to me. The event actually happened two years ago already, but I think it is timeless (and priceless). The article discusses the small town of Leith, North Dakota, which has made international news in recent years because of a group of right-wing extremists and outright neo-Nazis who campaigned among like-minded people to move in and take over the town. This particular piece discusses antifascist and Native American activists from the nearby Standing Rock Indian Reservation converging in Leith for a rally during which a group of Native women elders captured a Nazi flag.

Although the events in Leith are specific manifestations of American racism and the conflicts it creates among American communities, they tie in nicely with my work on Nazi perceptions of Native Americans, back in the early twentieth century and now. Propaganda campaigns by Goebbels’ ministry to stop Natives from supporting the US in World War II failed, the German American Bund’s mole campaigns intent on inciting pan-tribal organizations such as the American Indian Federation (AIF) in order to destabilize US society failed as well (see Kenneth Townsend‘s and Jere Franco‘s books regarding these events). In 1939 and ’40, Native American tribes in the Southwest publicly abandoned their use of the swastika symbol in their arts and crafts because the Nazis had soiled its symbolic power. German newspapers did not report on that particular reaction. They, as well as today’s German neo-Nazis, preferred to compare atrocities committed against Native people during the “Indian Wars” with the near-extermination of the buffalo and the Anglo-American bombing campaigns against German cities in World War II.

So, although the neo-Nazis in Leith did not proselytize among Native people as their German role models did in the 1930s, these Native protesters’ reactions are part of  a long tradition of refuting Nazi advances and of standing up to everything the Nazis stand for.

Like Loading...
By frankusbeck in Uncategorized on June 3, 2015.
← Contested Science: Workshop on Biology in Public Discourse at Annual American Studies Meeting Book in Hand →