Home » Uncategorized » Lecture on Milblogs in Omaha and Research on Veteran Organizations in St. Louis

Lecture on Milblogs in Omaha and Research on Veteran Organizations in St. Louis

A few days ago on 3rd December, I have held my last lecture on this trip. While the earlier lectures discussed my work on German perceptions of Native American cultures and promoted the forthcoming book, this talk presented some of my current work on deployed soldiers’ milblogs. This guest lecture was hosted by University of Nebraska, Omaha’s English Department and the Office of Military and Veteran services.

I met Dr. Charles Johanningsmeier, who invited me to Omaha, during his Fulbright year at American Studies Leipzig in 2007. Since then, we have kept in close contact and frequently worked together. Omaha is very dear to me, for the friends and colleagues I know here but also because this is where I held my first lecture when my dissertation project took shape in 2007.

Last week’s lecture provided an overview of the interdisciplinary methodology of the project and contextualized Native American military traditions before launching into a close reading of an American soldier’s milblog from Afghanistan. I pointed out different elements of ceremonial storytelling in the interaction between deployed soldiers and civilian audience. Some of these textual elements led back to the presentation on “tribute and memorial posts” I held at the 2014 ASA convention in Los Angeles. Similar to my reflections on the longue dureé in Indianthusiasm for teaching due to the lectures on Nazis and the GDR that I held over the course of only one weekend in Oklahoma in late October, this lecture helped me approach the topic of death and mourning in milblogs from different angles, discuss it with a diverse audience, and thus extend the scope of my work from the ASA presentation in early November. This widened perspective will help me tackle another chapter of the blog project in the coming year.

Apart from the academic values gained from this final lecture, it was fascinating to observe the environment in which the event took place. The lecture was held at UNO’s Community Engagement Center, a brand-new building dedicated to community outreach. The audience was thus both “gown” and “town,” comprised of students of both English and Native studies courses, veterans, and members of the Omaha community. As my colleagues told me, UNO was recently rated the best four-year college in veteran services by the Military Times. It was thus particularly interesting to observe and discuss veterans’ affairs at this institution. This also brought back discussions and observations from last year’s conferences at UC Santa Barbara and Copenhagen where many discussions and presentations centered around the question of college veteran services, student veterans, and the role of the humanities in veteran reintegration. 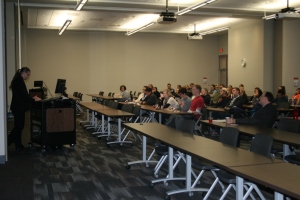 Similar questions recurred during the last few days when I met with colleagues and representatives of veteran groups, such as The Mission Continues. The Mission Continues has recently become one of the best-known veteran support groups. They focus on community service and volunteerism as its founders have realized that many veterans are eager to continue serving and that volunteerism, i.e., helping others, helps veterans to help themselves in their efforts to reintegrate into civil society. I became interested in groups like TMC when looking at the warrior philosophy of Native American military traditions and their strong focus on ceremonialism, community relationships, and mutual aid. Native studies scholars argue that “warriorhood” is anchored in perpetual community relationships, while “soldiering” in the ‘Western’ sense is more perceived as playing a social role. The community engagement of The Mission Continues reminds me of relationships in changing tasks (from fighting to, say, charity or care-giving) known from native warrior philosophy.

Since both Native scholars and military psychologists have argued that ceremonialism and community relationships  might support the reintegration of non-Native veterans and could play a role in working through their traumatic experiences, I have begun looking beyond milblogs to find other non-Native efforts to implement community and ceremony in my research during this year. The Mission Continues is a very good example for such efforts. Getting together with TMC representatives as well as social sciences scholars from Washington University and Lindenwood University in the St. Louis area helped me explore these veteran groups’ efforts. Their information and advise provided valuable social science perspectives for my project. I will continue to look into this and similar projects, although they are not deployed soldiers’ narratives, to look for ceremonialism and community interaction as ingredients for reintegration.

By frankusbeck in Uncategorized on December 9, 2014.
← How Living in a Bubble Affects Students’ Perceptions of Native Americans New Year Special: Fun Facts on Hitler →