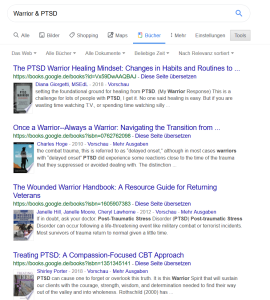 A quick search on Google Books for “Warrior” and “PTSD”

This year’s annual meeting of the German Association for American Studies had popular culture as its central theme. At the opening, speakers pointed to the apparent disconnect between the strong tradition of popular-culture scholarship in German American studies and the fact that, until this year’s 66th meeting, popular culture had never been the central theme.

My colleagues Katharina Gerund and Mareike Spychala invited me to speak in the panel “Images of War: Popular Culture as Militainment.” The panel was a good opportunity to get together with colleagues in the field of military life writing and military culture research. In German American studies, quite a few thesis projects addressed topics such as post-9/11 war memoirs, fiction, milblogs, or focused on aspects such as gender in first-person war narratives. More projects are currently underway.

Inspired by discussions on the proliferation of loaded terms such as “warrior” at earlier GAAS meetings, I drew on research for my recently published book to take a closer look at terminology and concepts. I presented examples from military parlance and institutions (e.g. the Soldier’s Creed, Warrior Transition Units), self-help books, and civic activism, where the term “warrior” has been fashionable since the early 2000s.

Although usage of the term “warrior” for US military personnel seems ubiquitous, diverse protagonists argue against its use and insist on calling military personnel “soldiers.” I cited a few examples of criticism from folks who believe that an association with “warriors” and warrior culture diminishes the emphasis on professionalism in the US military. These arguments, however, often employ an ethnocentric, ahistoric, sometimes even racist understanding of “warriors” in that historical warriors are portrayed as undisciplined, bloodthirsty glory hounds. This notion goes hand in glove with the popular understanding and usage of “tribal,” i.e. the notion that a ‘tribal’ group derives its identity from hatred and the resulting violence against any and all outsiders. Historical examples for such negative portrayals of ‘warriors’ are often ancient Greeks, medieval knights, or Indigenous groups.

In contrast, a lot of the activist scholarship and non-fiction I analyzed for Ceremonial Storytelling frequently refers to Native American warrior traditions and, thus, employs a positivist representation of ‘warriors,’ mainly through the perspective of social relationships. I discussed examples such as Sebastian Junger’s Tribe and Edward Tick’s Warrior’s Return to argue that these social activists see psychological war injury and veterans’ reintegration problems as signs of a social crisis in US society, rather than as mere individual afflictions. They seek inspiration and role models from the social responsibilities between Indigenous warriors and their communities (and are sometimes dismissed as “primitivism fantas[ies]” for that reason). Applying a social perspective to the concept of the warrior, these activist scholars and writers hope to develop civic ceremonies, such as town hall meetings with veterans and civilians on Memorial Day, to mend civil-military relationships and to promote veteran reintegration. In their understanding, a warrior is not a bloodthirsty individualist, but someone who sacrifices personal interest for the benefit of the group, and they call upon US civil society to acknowledge its responsibility for soldiers in return.

My fellow panelists presented work on the “metonymic war veteran” in cultural expressions such as Black Panther (David F. Eisler), on the soldier group as a symbol for US society in combat films such as Air Force and Full Metal Jacket (Martin Holtz), on the depiction of child soldiers in graphic novels (Tatiana Prorokova), and on the representations of violence and diversity in the children’s TV show Liberty’s Kids on PBS (Carsten Junker).