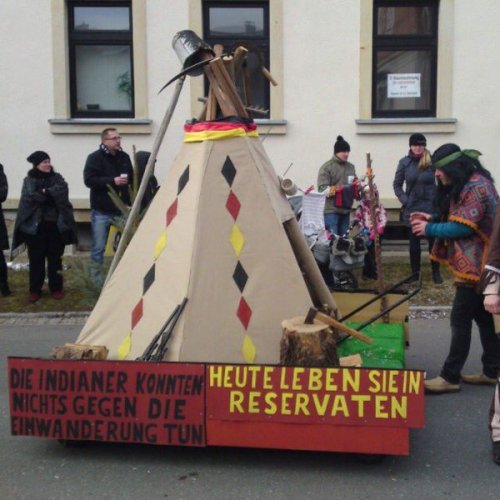 ‘Indigenous’ culture in Germany, under threat from invaders disguised as refugees – float at a carnival procession in Altenberg, Saxony, 2016. The caption reads “Indians Couldn’t Stop Immigration. Now they Live on Reservations”

In May 2015, I attended a conference on the history of German perceptions of the US since 1945 in Tutzing. My presentation explored how nationalist and racist tropes of the Nazi era utilized Native American imagery and historical comparison, and how these arguments were adapted among neo-Nazis and right-wing populists in Germany to stoke nativist sentiment during the current refugee crisis. In the following months, I developed a series of blog posts on this issue:

Earlier this month, my colleague Volker Benkert published the German-language conference collection, titled Feinde, Freunde, Fremde?…. My contribution further develops ideas laid out in these early blog posts. Other contributions cover transatlantic comparative analyses of genocide, German-American cultural transfer, perspectives on the US in East and West Germany during the Cold War, and German-American relations until today.

Initially, I had intended the series on Indian imagery in German nativism and immigration on this blog to be a minor spin-off following my dissertation research. Recent events, such as the growing influx of refugees since 2014, the rise of nationalist, nativist, and racist political organizations, and their increasing visibility in public discourse, however, merit more deeper explorations of the issue. It seems that protagonists in these public debates not only recycle Indian imagery and argumentation from the Nazi era, but that growing exchange and interrelation among similar political currents across Europe also shares and disseminates related imagery, such as references to Native Americans and Indigeneity.

By frankusbeck in Uncategorized on March 17, 2018.
← “Indigenous People of the Germanites”: More News from the Nationalist Fringe Publications on Veterans, Volunteerism, and Writing →